The successes of Israeli cinema in the 1960s and the 1970s made way for a period of confusion and disappointment within the 1980s. But this era also ushered in something new. The fallout after the assassination of Prime Minister Rabin, coupled with the development of commercial television and the emergence of Israeli filmmaking schools, spurred a generation of highly creative artists. Dozens of movies are produced each year, and the creators become more diverse: women, religious, and Palestinian filmmakers begin to find their voices, and new genres emerge. Films such as ‘Late Marriage’, ‘The Band’s Visit’, ‘Waltz with Bashir’ and ‘Footnote’ garner international success, and Israeli directors become known throughout the world.  Israeli cinema continues to react to the social, military and political reality, although at times, in delay. The Lebanon War, the murder of Rabin, the Israeli-Palestinian conflict and the widening social gaps within Israeli society present the backdrop for controversial films that receive international praise and criticism.

A film by Noit Geva 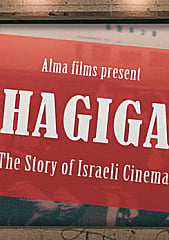