A vast and violent labyrinth lies right in the heart of Tel Aviv. It is the Central Bus Station, Israel’s main transportation artery. Living in and around it are thousands of new refugees, the second generation of guest workers with no identity of their own, and impoverished Jewish families who feel like strangers in their homes. This labyrinth is at the center of their lives. Chaos rules in this impossible meeting place. The racism that erupted from its cellars has gotten out of control and life continues precariously, as if perched on a keg of gunpowder. A war of all against all.

A film by Julie Shles

"Gritty, seamy, violent, and mesmerizing. It is a documentary in the best tradition of the urban expose".

Produced With The Suppport Of: Makor Foundation, Yes Docu 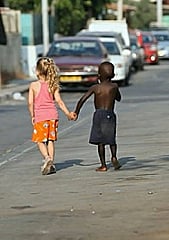